We performed a literature analysis to define a one-dimensional, coupled movement trajectory for the shoulder in daily life. 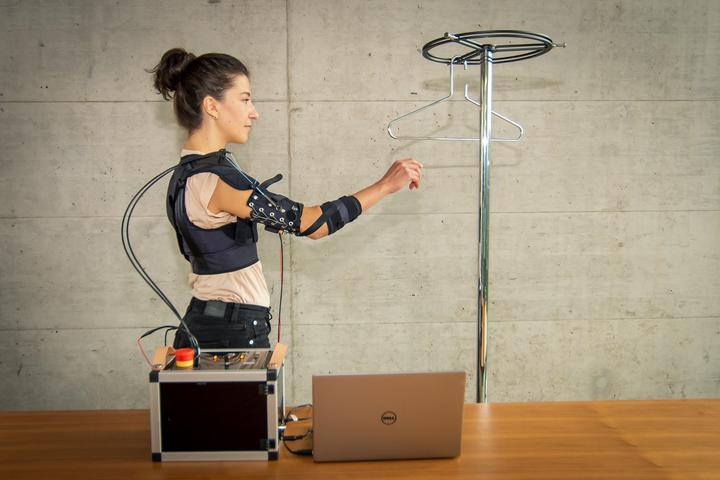 In the past few years, several light-weight soft wearable robots, so called exosuits, for upper extremity assistance have been developed. The design of exosuits is often based on a bio-mimetic design approach, mimicking the human biomechanics. However, in the design process, the interactions of movement directions during daily living tasks have not yet been analyzed comprehensively. Therefore, the designs of exosuits might be overly complex, as movement directions that are coupled during daily life tasks were implemented independently; or lack functionality, as relevant movement directions were disregarded. In the meta-analysis presented in this paper, the maximum angles occurring during daily living tasks in the upper extremity of unimpaired individuals were examined. To identify the kinematic couplings between joint axes, the interactions between movement directions that act against gravity were analyzed. The strongest correlations were found between rotation in the plane of elevation and humeral axial rotation (R 2 = 0.82, p <; 0.001), and between humeral elevation and humeral axial rotation (R 2 = 0.16, p = 0.001). Shoulder rotations and elbow flexion were not correlated. We conclude that humeral axial rotation is a relevant movement direction in the upper extremity, which, so far, has often been neglected in the design of exosuits. To simplify the design of exosuits, we propose a one degree of freedom support trajectory in which rotation in the plane of elevation (at 70° and 80°) and humeral axial rotation (at 110° and 60°) are coupled to humeral elevation (continuously from 40° to 110°).