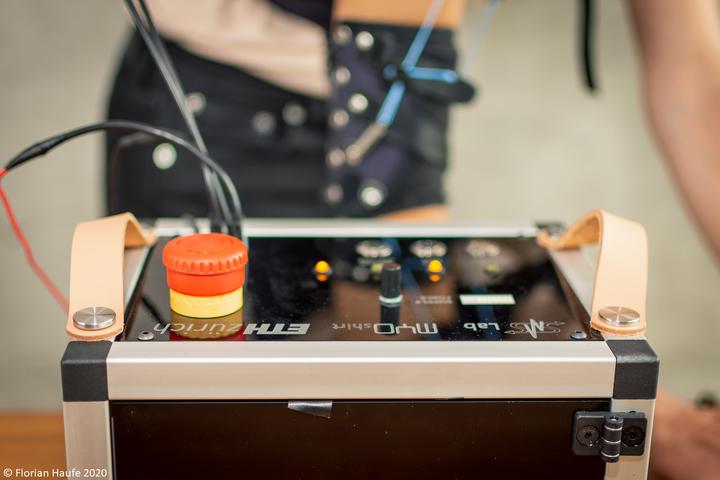 Soft wearable robots, or exosuits, area promising technology to assist the upper limb during daily life activities. So far, several exosuit concepts have been proposed, some of which were successfully tested in open-loop control. However, though simple and robust, open-loop control is cumbersome and unintuitive for use in daily life. Here, we closed the control loop on the human-robot interface of the Myoshirt. The Myoshirt is an upper limb exosuit that supports the shoulder joint during functional arm elevation. A direct three controller (DF) as well as an indirect farce controller (IF) were implemented on the Myoshirt to assess their suitability for autonomously tracking human movement. In a preceding testbench analysis, a direct force controller with linear friction compensation (DFF) could be excluded, as linearly compensating friction aggravated the force tracking error in the ramp response (RMSE mean|sd: 32.75|10.95 N) in comparison to the OF controller ramp response (27.61|9.38N). In the same analysis, the IF controller showed substantially better tracking performance (17.12|0.91). In the subsequent movement tracking analysis including five participants (one female), the position tracking error and smoothness (median(RMSI ), median(SPARC)) were similar with the DF (3.9°, -4.3) and lF (3.4°, -4.1) controllers and in an unpowered condition (3.7 , -4.2). However, the force tracking error and smoothness were substantially better when the IF controller (3.41,-4.5) was active than with the DF controller (10.4 N, -6.6). The magnitude response in the Bode analysis indicated that both controllers were obstructing the human movement at higher frequencies, however with 0.75 Hz, the IF controller satisfied the bandwidth requirement for daily life assistance, while the DF controller (0.83 Hz) did not. It can he concluded that the IF controller is most suitable for assisting human movement in daily life with the Myoshirt.