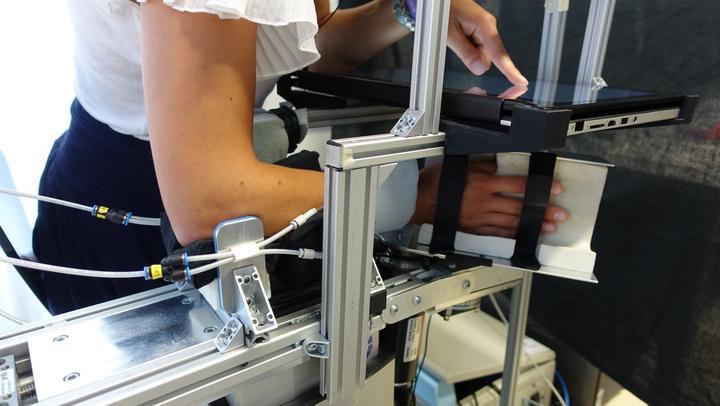 Stochastic stimulation has been shown to improve movement, balance, the sense of touch, and may also improve position sense. This stimulation can be non-invasive and may be a simple technology to enhance proprioception. In this study, we investigated whether sub-threshold stochastic tactile stimulation of mechanoreceptors reduces age-related errors in wrist position estimation. Fifteen young (24.5±1.5y) and 23 elderly (71.7±7.3y) unimpaired, right-handed adults completed a wrist position gauge-matching experiment. In each trial, the participant’s concealed wrist was moved to a target position between 10 and 30° of wrist flexion or extension by a robotic manipulandum. The participant then estimated the wrist’s position on a virtual gauge. During half of the trials, sub-threshold stochastic tactile stimulation was applied to the wrist muscle tendon areas. Stochastic stimulation did not significantly influence wrist position sense. In the elderly group, estimation errors decreased non-significantly when stimulation was applied compared to the trials without stimulation [mean constant error reduction Δμ=0.8° in flexion and Δμ=0.7° in extension direction, p = 0.95]. This effect was less pronounced in the young group [Δμ=0.2° in flexion and in extension direction, p = 0.99]. These improvements did not yield a relevant effect size (Cohen’s d < 0.1). Estimation errors increased with target angle magnitude in both movement directions. In young participants, estimation errors were non-symmetric, with estimations in flexion [μ=1.8°, σ=7.0°] being significantly more accurate than in extension [μ=8.3°, σ=9.3°, p < 0.01]. This asymmetry was not present in the elderly group, where estimations in flexion [μ=7.5°, σ=9.8°] were similar to extension [μ=7.7°, σ=9.3°]. Hence, young and elderly participants performed equally in extension direction, whereas wrist position sense in flexion direction deteriorated with age (p < 0.01). Though unimpaired elderly adults did not benefit from stochastic stimulation, it cannot be deduced that individuals with more severe impairments of their sensory system do not profit from this treatment. While the errors in estimating wrist position are symmetric in flexion and extension in elderly adults, young adults are more accurate when estimating wrist flexion, an effect that has not been described before.